Some of the best universities competed a few days ago in SpaceX’s Hyperloop Pod Competition III, where their high-speed revolutionary projects of the future of transportation had to succeed and be the fastest to win. Noksel España’s sponsored team, Hyperloop UPV, attended for the third time in a row with their recently introduced pod, «Valentia», and ranked the 8th position out of seventeen teams.

Universitat Politècnica de València posted daily information about the competition and how the Spanish team was working in California. At the beginning of the competition, «Valentia» succeeded every initial control inspection and it was very lauded by the jury. Hyperloop UPV was on the top of the ranking until a valve failed, being the first obstacle that they repaired quick and efficiently. The team kept working and adjusting their pod’s features but the following difficulties within the electrical system made the Spanish team not able to perform in the vacuum pipe test. 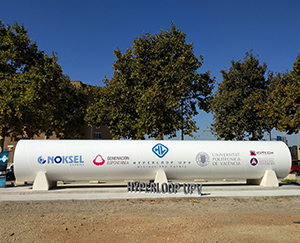 There were only six teams that tested their pods in the 1,2 km steel pipe of SpaceX’s facilities in California. Last year, German team WARR Hyperloop from Technical University of Munich reached 324 km/h, being the fastest in the competition. A few days ago, the same team accomplished a new record and victory of the competition with 466 km/h.

Despite the non-qualification for the vacuum pipe test, Hyperloop UPV team learned and enjoyed the competition: new ideas, new technological innovation and new data that will help to keep developing a faster transportation.

Hyperloop Pod Competition is a demanding competition where high-level engineering meets: pods’ security measures, procedures and requirements equal rocket demanding conditions. The tests are complex and difficult to surpass and succeed, although «Valentia» was able to accomplish most of them along with the difficulties. Hyperloop UPV’s pod and teamwork impressed SpaceX.

We congratulate and welcome the team back! They will keep working and preparing for the next competition thanks to this experience and by improving «Valentia» and testing with Noksel España’s supplied spiral welded steel pipe. Keeping making real what started as a high-speed dream.