On 15th June, Hyperloop UPV team showed their new pod for the Hyperloop Pod Competition III by SpaceX that will take place in California next month. They will participate in the speed competition where expecting to reach 400 km/h. We talked to some members about the pod, the competition and Hyperloop UPV’s future steps. 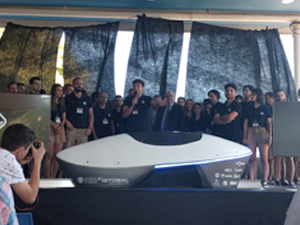 Question: Today you are showing your new pod, «Valentia», which is 4 times more powerful that Atlantic II and that will ride on a single rail inside a pipeline. How is SpaceX’s pipeline?

Answer: SpaceX’s current pipeline is a steel pipe with 1,8 m of outside diameter and 1,2 km length with a concrete base where the aluminum single rail is centered and also surrounded by aluminum plates. The use of aluminum is important because it eases repulsion magnetic levitation that works with different configuration of magnets.

Q: During the following competition, will the pipeline be the same as last year?

A: Yes, it is the same pipeline. SpaceX invested a lot in this pipeline to not limit any levitation or propulsion technology. We do believe it could be good to invest in a new pipeline design that works along with the development with the pods, but now we have to focus on this pipeline and be the fastest team.

Q: According to your own pipe, the Hyper-track supplied by Noksel España, what are the next steps for it?

A: The spiral welded steel pipe has to become one of the biggest vacuum chambers in Europe but the sealing is very difficult. There are only a few companies that can do it and it is expensive. We are working on a secure sealing that assures vacuum and let us work comfortably with it. One of the pipe ends is easy because it just needs a fixed cover whose sealing, welding and leaking are the difficult issue. But the other pipe end is more complicated since it also needs a gate.

Once we have sealed the Hyper-track, we will have a perfect test bench for developing vacuum technology, testing real-time components conditions, material behavior and tracking inside the pipeline.

Q: It is starting with a vacuum chamber that could develop into a testing pipeline. What does Hyperloop UPV think about that possibility?

A: Nowadays the possibility of having a real testing pipeline is a complex issue because of the need of some piece of land. We would like to have it nearby, so we can work on it, but it is difficult. We would need a long-enough stra ight pipeline to try acceleration and cruising speed.

Q: How long would you need a pipeline to be useful for Hyperloop’s development?

A: There are some pipelines in construction now but the longest working pipeline for Hyperloop is SpaceX’s. It is 1,2 km length and it is still short. We would need a longer pipeline to test real conditions for a pod that could achieve 100km/h for real, accelerate and brake easily.

Our current situation in Hyperloop UPV let us prototype and test different technologies for propulsion, braking, levitation… The competition is about working and developing ideas from different universities until we all get a formula where speediness, cost, secureness and every feature work out and work efficiently.

Noksel España, as official partner, we would like to wish luck to Hyperloop UPV team for their future challenges.